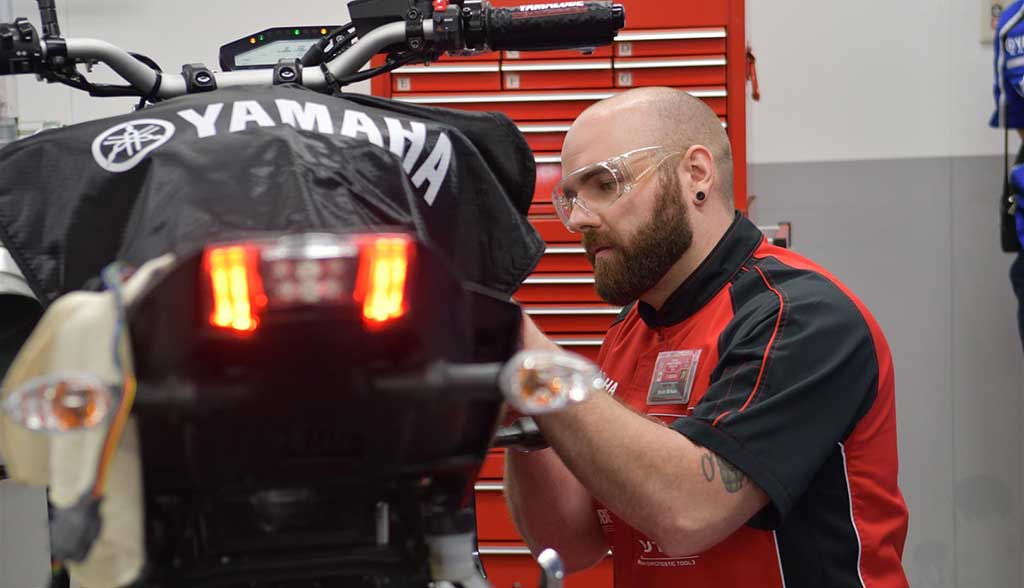 (Toronto, ON) - Friday, October 19, 2018 - For the first time ever, a Canadian representative was crowned champion at the Yamaha World Technician Grand Prix, held at Yamaha Motor Corporation's headquarters in Iwata, Japan on October 17. Brett Hart, a master technician at Blackfoot Motorsports (Calgary, AB), earned the prestigious title at the 8th running of the World Tech GP.
"Words cannot describe the way I feel," said Hart after the event. "It's surreal, a dream come true. I have been treated like a celebrity by Yamaha staff, and all the competitors act like I'm a rock star. It's unlike anything I have experienced before."
Hart earned his spot in the world finals by winning the Canadian qualifier (CALGARY MECHANIC WINS YAMAHA CANADIAN TECH GP), held at Yamaha Motor Canada's Toronto offices in July. Hart had previously been a three-time Canadian finalist before breaking through with his first win this year.
Similar to the Canadian competition, the day-long WTGP included both technical and customer service labs, providing an extra level of challenge for staff who spend most of their time wrenching behind the scenes rather than interacting with customers.
Hart admitted to overthinking during the technical lab, putting his hopes at risk. "I was second-guessing myself instead of trusting my training," the Calgary native explained, "but I was able to get past it and quickly made up points."
In addition to the full-day competition, the WTGP finalists enjoyed a meeting with the governor of the Shizuoka prefecture, a tour of the impressive Yamaha Communication Plaza and factory assembly line in Iwata, opening and closing ceremonies, a farewell dinner with a traditional Japanese magic show, and a two-day tour of Kyoto and Osaka.
Hart bested 21 competitors representing 19 countries and regions, finishing ahead of second-place Darren Stout of Australia and third-place Alan Simmonds in the Sports Model class. There are an estimated 34,000 Yamaha Technical Academy-certified technicians across the globe, making Hart's achievement all the more stunning.
"I think this shows that Yamaha Motor Canada takes service very seriously and should be respected on a global level," Hart summarized. "It shows we care for our customers and have the skills to keep them safe and happy on the roads."
Held every two years, the Yamaha Technician Grand Prix is organized as part of Yamaha Motor Corporation Ltd.'s global service education plan. The goal of the Yamaha Tech GP is to raise awareness and increase competency of Yamaha's technicians.